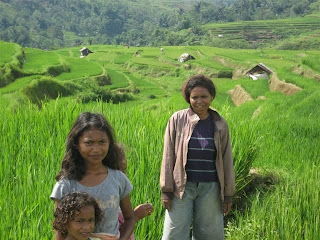 In Resem village we met a family with four children. They have a house right in the middle of the rice fields and spend most of the time in the fields. The whole family works as farmers for other villagers and they live a very difficult life. They don’t own their own land. Instead they work as farmers for other landowners and share the rice harvest. If they harvest six sacks from the land they work on, they will be able to take three and the owner of the land will take the remaining three.

But the family must also pay for healthcare and schooling for the children and the money is not enough. Because of this, one of the four children has gone to look for work in Ujung Pandang and the family also works for other villagers. When they have finished harvesting the rice, they take on other work. They look after other people’s crops and earn in total 15,000 per day.

The children also help their parents in the rice fields. They go to the school in the morning and went they return home they help take care of crops or go to find firewood. The woman of the family is not from Resem, but from another village close to the Liang Bua caves, where the fossils of an 18,000 year old human were found by Australian archaeologists. But the family are from Manggarai and culture dictates that the woman moves to her husband’s village after marriage.